Heyhey, I’m Nessi and the Level Designer and 3D Artist of Trash Patrol :)

I’ve never done Level Design before, so this was a first for me. It definitely helped a lot that I’m generally interested in how games and their levels are designed and that I watched a lot of Mark Brown’s game analysis videos and video essays on YouTube. I can only recommend his videos - especially to those who don’t know Mark Brown or his YouTube Channel “Game Maker’s Toolkit” yet.

Where do we start?

Before I started to design the level, I revised the key elements of our level. It was important for us that the level is designed in a way where it’s not too cramped for 4 players but also not too big for 2 players, since you can play our game with 2 to 4 people. The level should also have enough space for our gameplay elements, such as washing and drying the items as well as avoiding the human. Apart from that I also need to take our AI (the human) into account, who needs space to wander around the level.

We decided early on that we want our first level to be themed around a house. The early level concepts of mine were very generic and kind of boring if I look back on it - 4 rooms and one bigger hallway, standing in a quiet neighborhood. 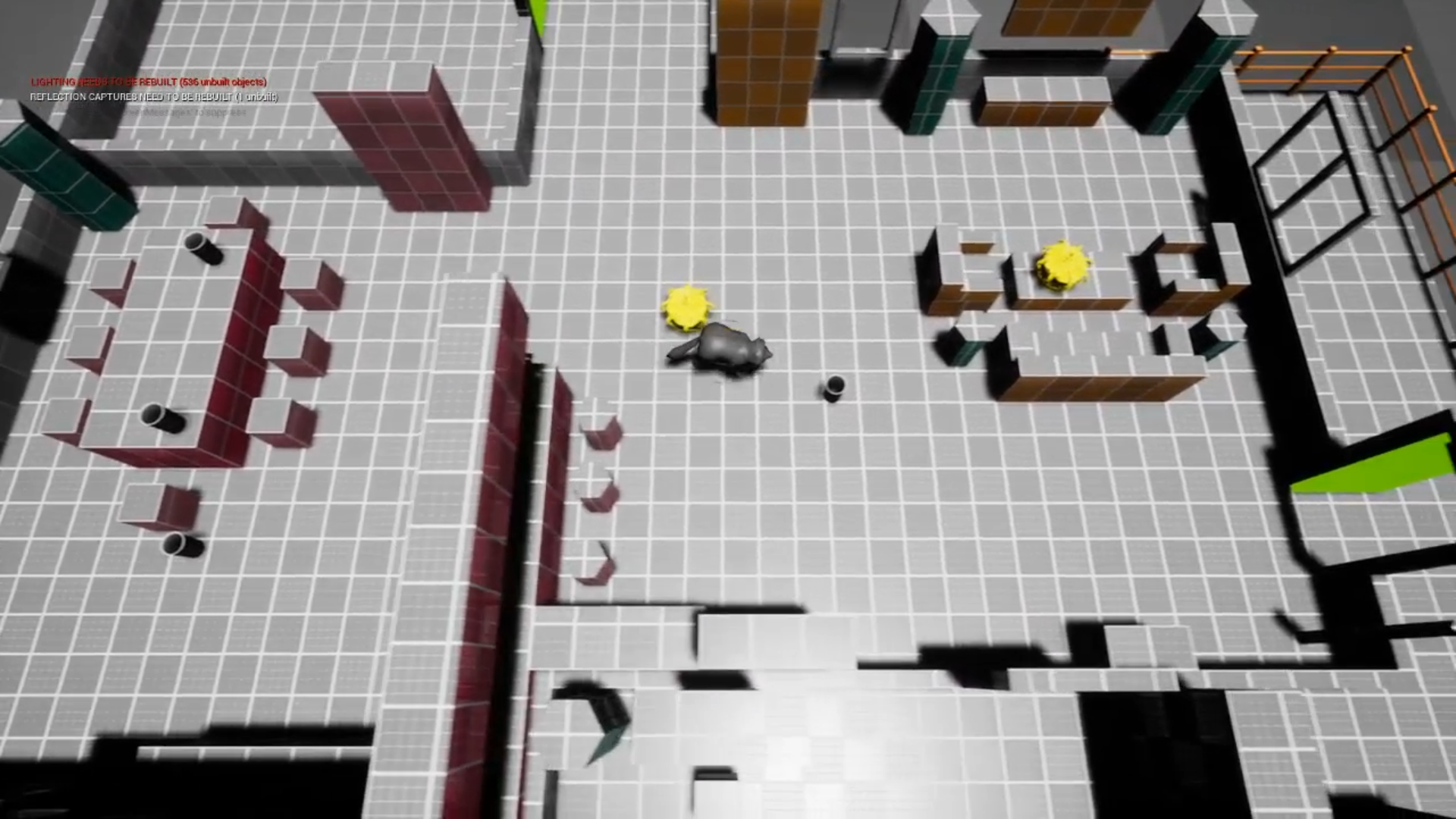 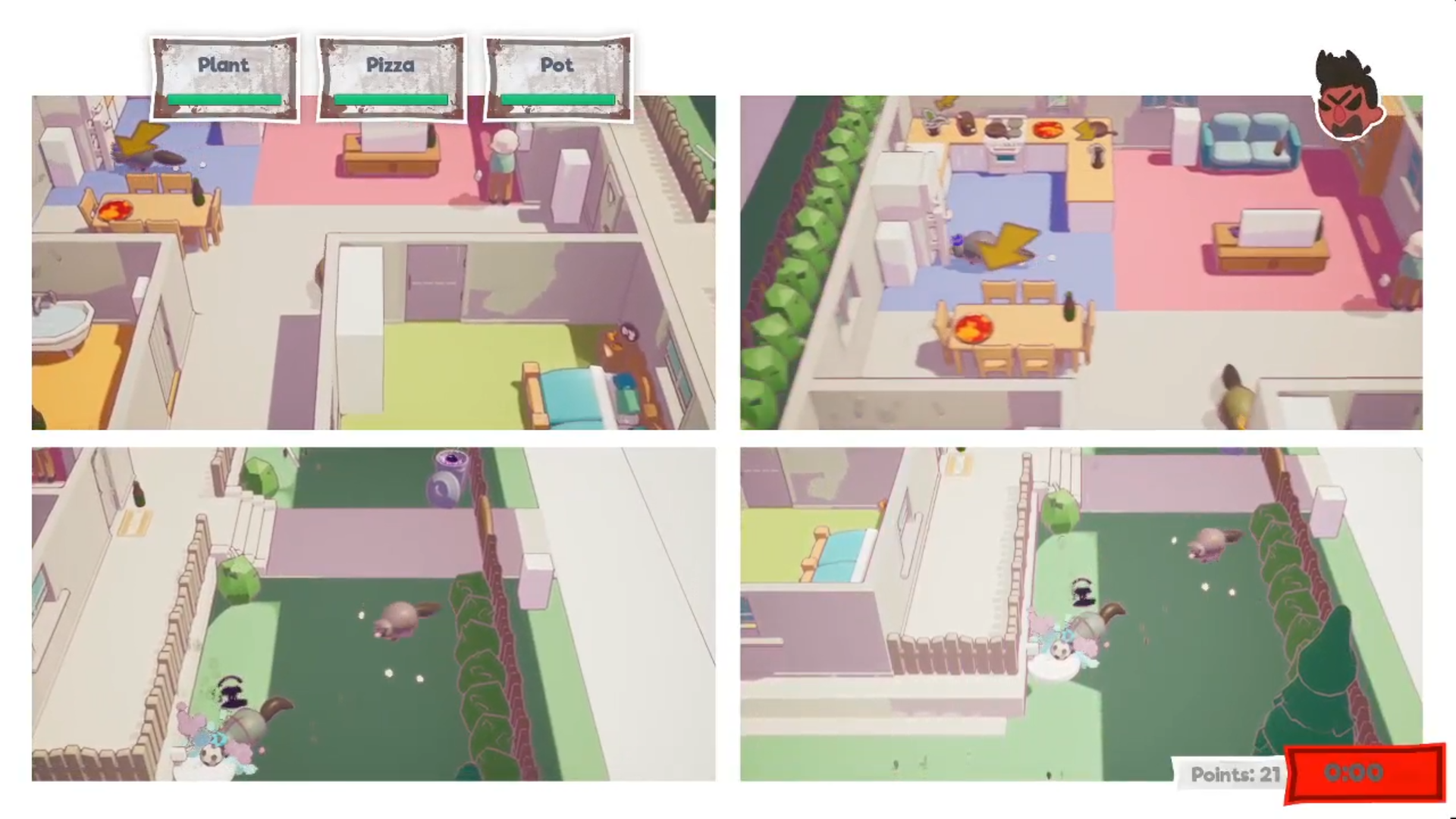 (I changed it to a smaller house, but with the gameplay shift from a balancing to a washing system it was too small. We also had a split screen back then)

For a long time I wasn’t sure about how big I should make the house so it’s not too spacious or too cramped for the players. The amount and the size of the rooms changed a lot in this period. I also kept it way too realistic, having only one door per room.

After the first few playtests we soon realized that the level is not going to work like that. It wasn’t fun to get chased into a room and having no way to escape, since many rooms are dead ends and the human is blocking the only exit.

I soon changed it to rooms that are spacious enough to avoid the human and added objects in the middle of the room. Those objects should on the one hand block the view of the human, so he doesn’t discover the player, and on the other hand enable the player to hide from him. This aided the strategic component of the game. To make it easier to escape and sneak by the human, almost all rooms were changed to have at least two exits. 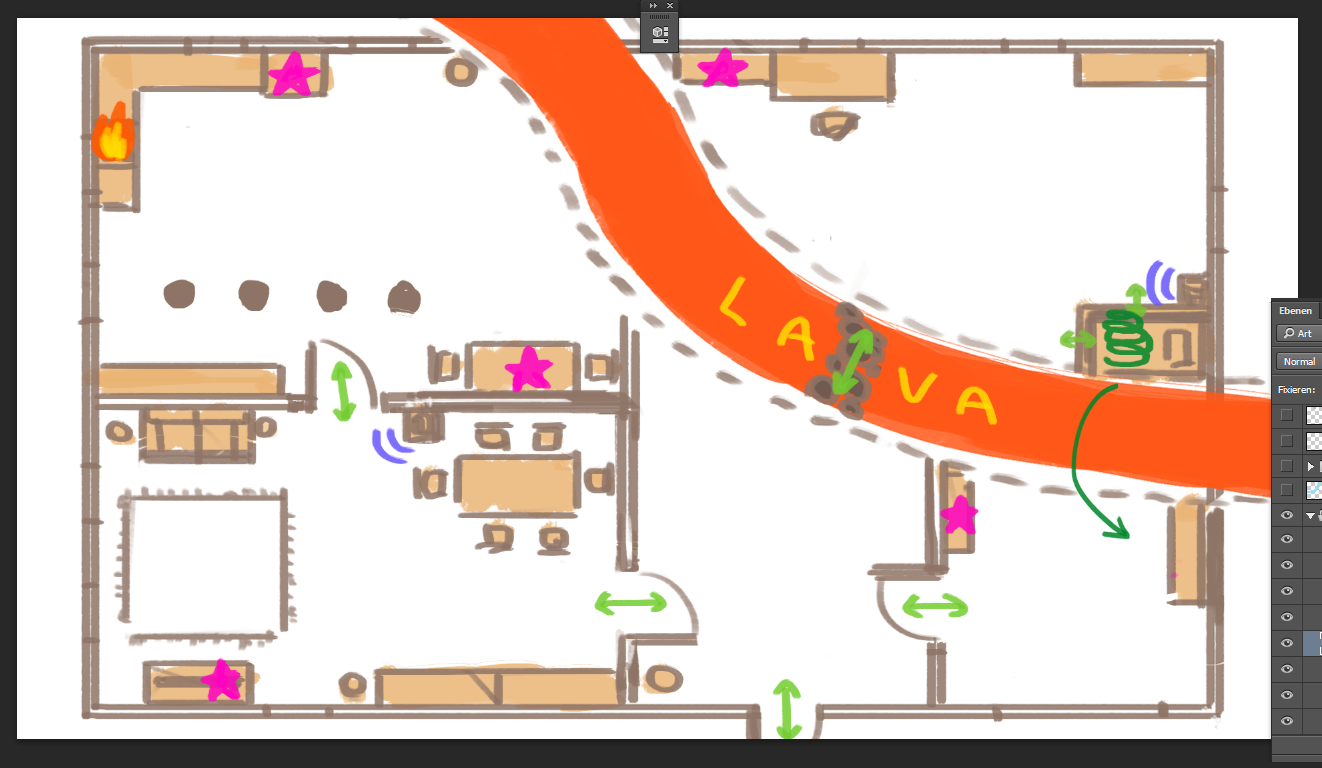 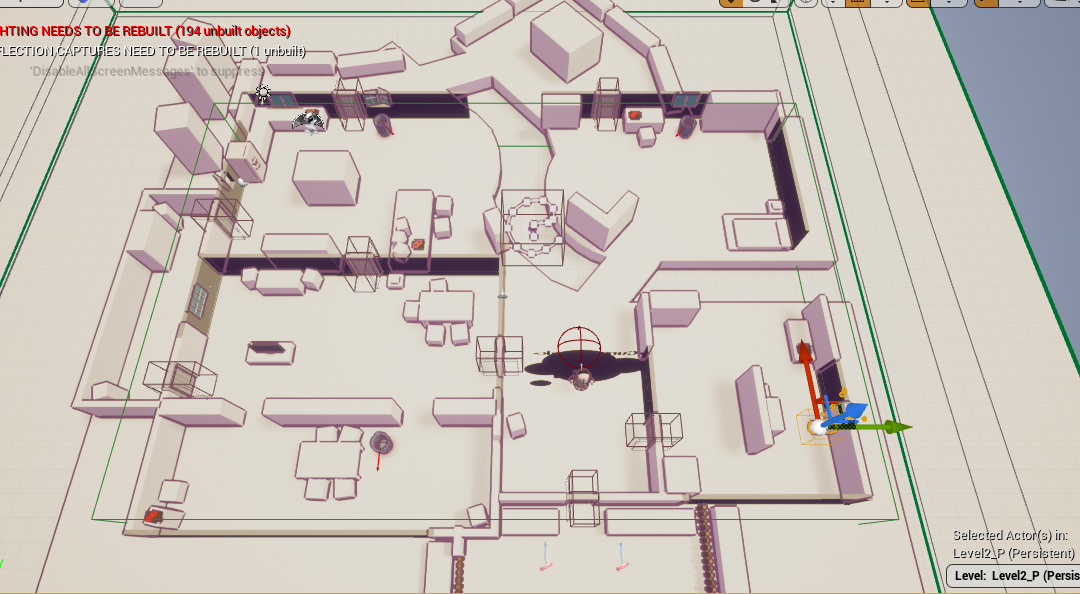 (sight-blocking-objects were added as well as an outdoor area)

In order to break the boring box-like layout of the level, I decided to put the house onto an island and literally break the level apart.

I offset the bedroom of the house to a separate island - making it a bit more unconventional and fun. For the path that the racoons can take, I decided on a U-shape that creates two dead ends – one being a save place where the human cannot go to, and one where the human can go to.

Since we didn’t want to make it too easy for the players and have a room that is more risky to be in, we left one dead end where the human can possibly catch the raccoon. The bathroom should encourage the players to communicate with each other, think through the situation and also cooperate to get out of the room safely.

We playtested the level and it did encourage the players to communicate with each other more, but it was still a bit too difficult when the human blocks the bathroom exit. - We needed something that helps the racoons to escape, but also brings another cooperative component to the game. So we came up with the pipe-vents. 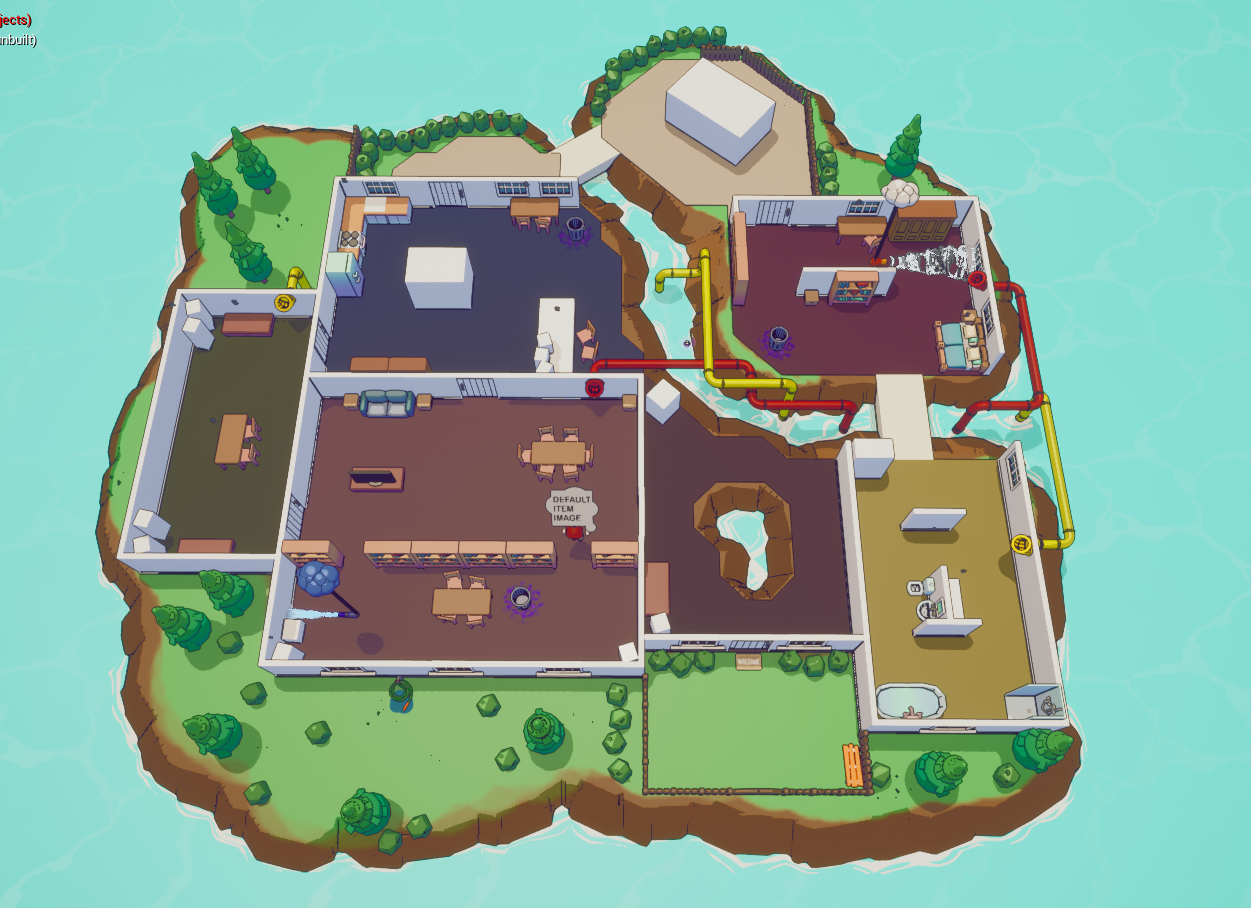 I used the vents to close the circle and bridge the dead end to the entrance. I also used them to connect the rooms that are further apart. The vents should reward players who work together with a faster travel route. You can get around the level if you run around alone, but it will take more time than if you work together and use the vents. 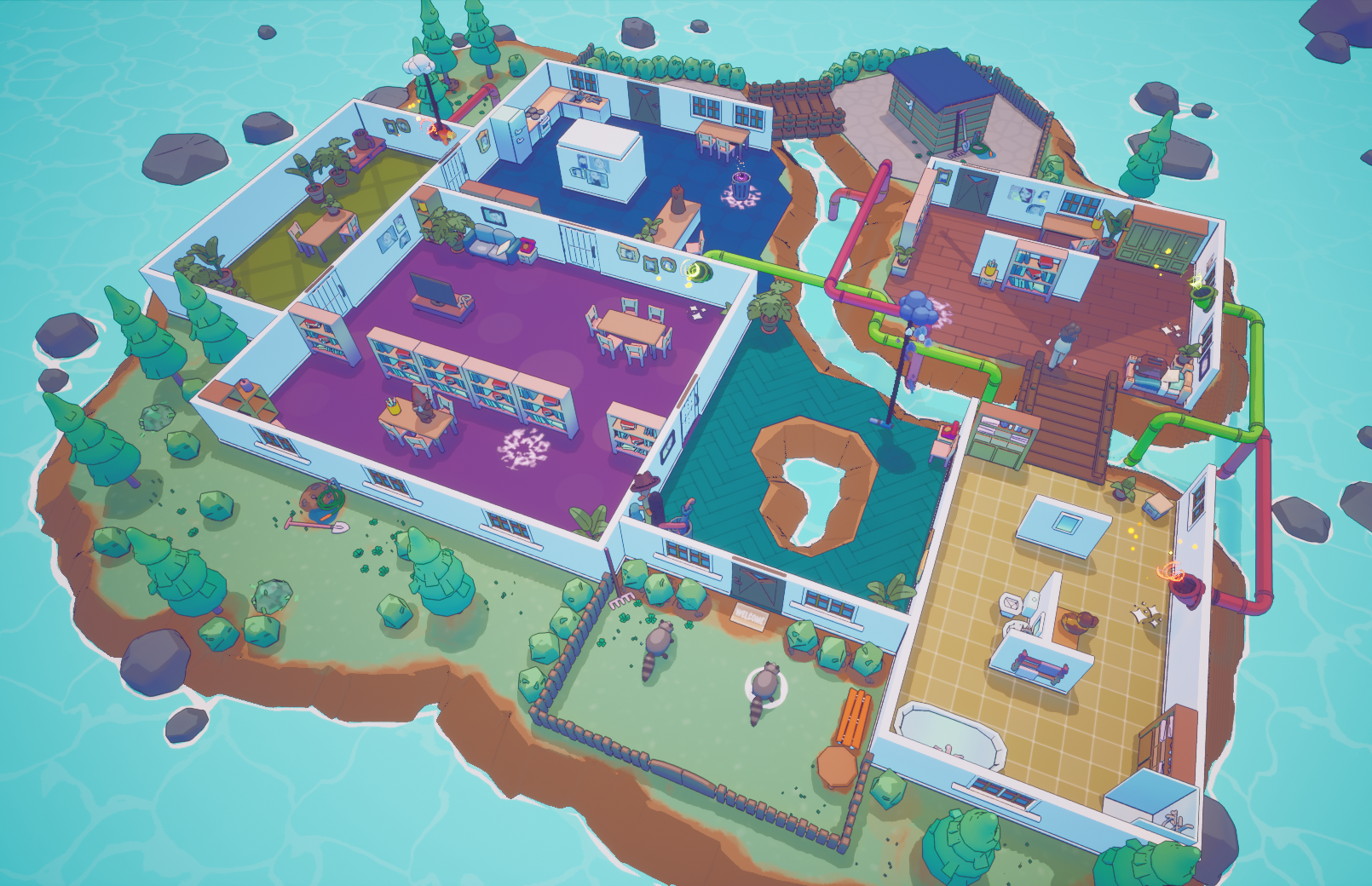 If someone would ask me what I take from this project, I can only say: Playtest a lot! Only through playtesting you can design and create a level that is fun for the players to play and find out what works and what not.

I hope I could give you a brief insight of how one of our trashiest level was created :D See you around!