Trash of the Day: Tuesday - Painting The Trash

Hi, I’m Hannah and this is my trashy blog post, and what I’ve contributed to our lovely game.

The whole project basically started with me, a regular raccoon lover. I knew I wanted to create a cartoony, colorful and silly game as my master’s project, so I decided to make it revolve around raccoons. Thankfully people loved the idea, and just in a couple of days I had a team.

I decided to lead the team & mainly focus on 2d art and graphic design for this project. In the early beginnings I’ve created some concept art for the game, as well as some drawings so I could pitch the idea to our teachers. The game has changed a lot since then, so keep that in mind. 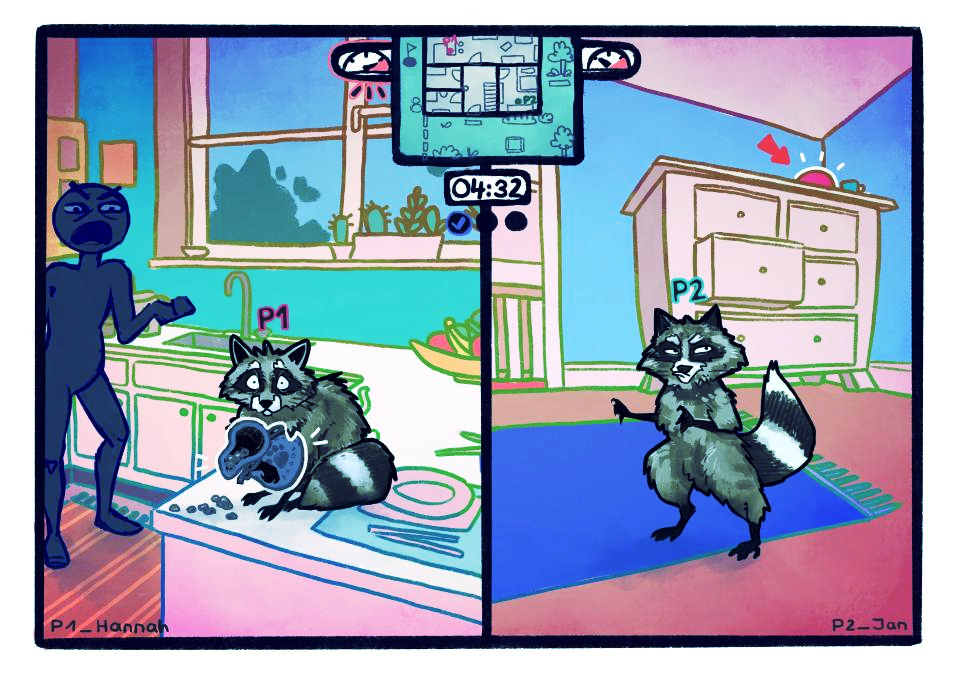 This is one of the first images that I’ve created, I originally wanted to make a third-person split-screen party game. This idea was pretty soon shut down but in my head there’ll always be a game version like this.

This was also the first time I’ve drawn some raccoons, I later decided they needed to be fatter and cuter. 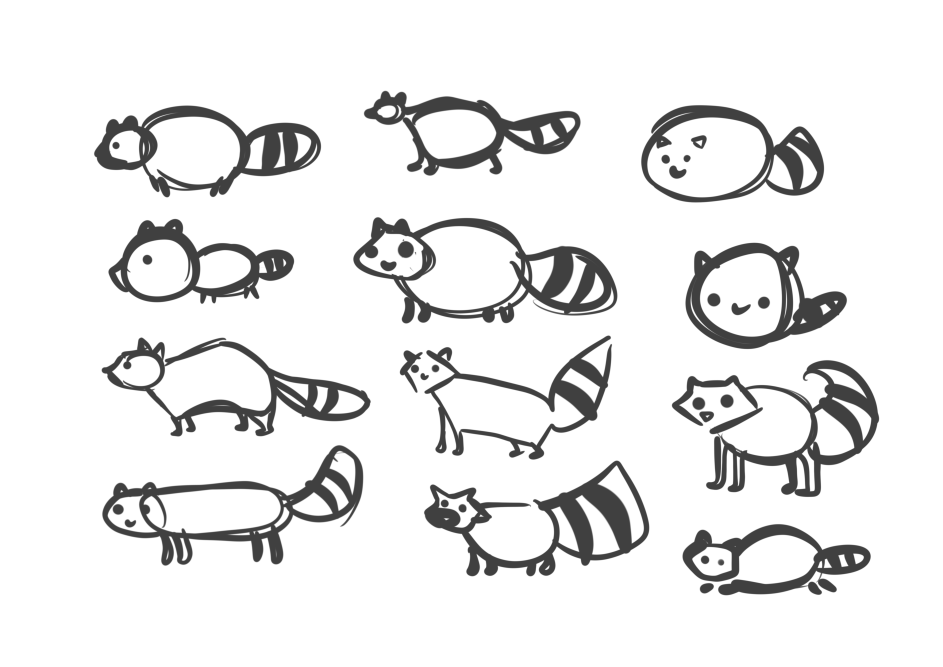 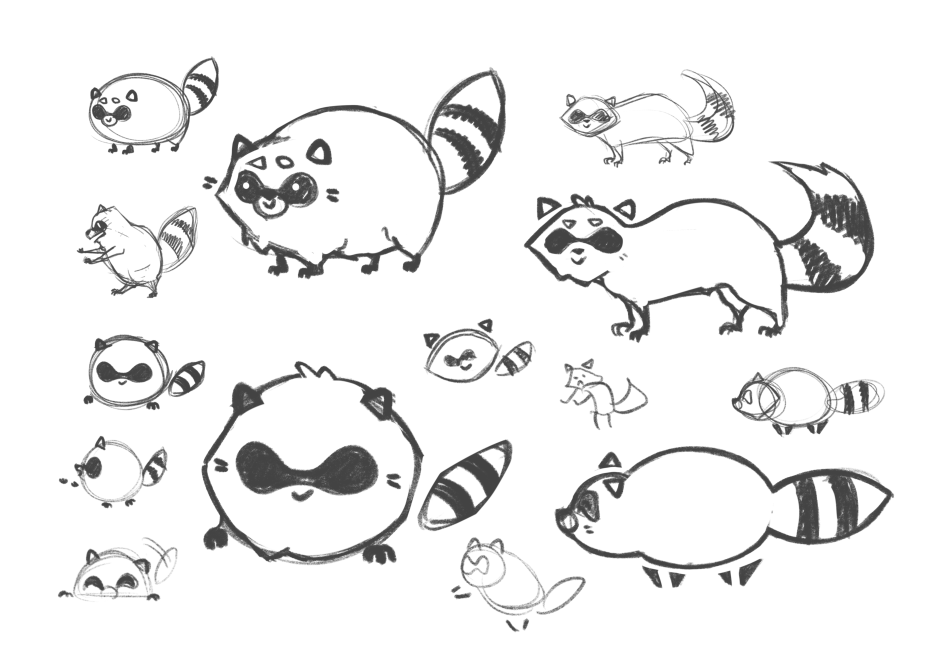 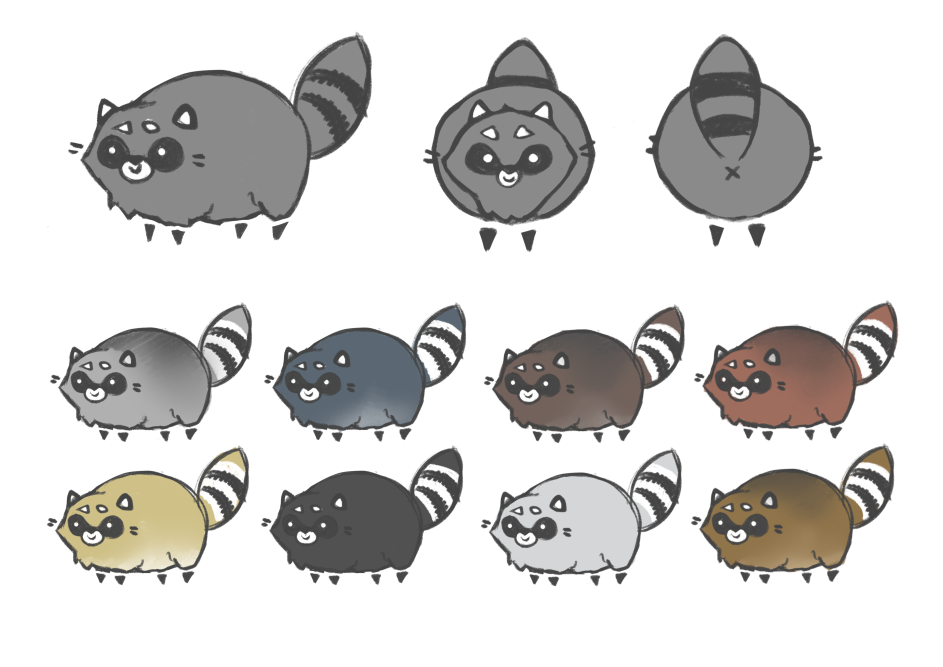 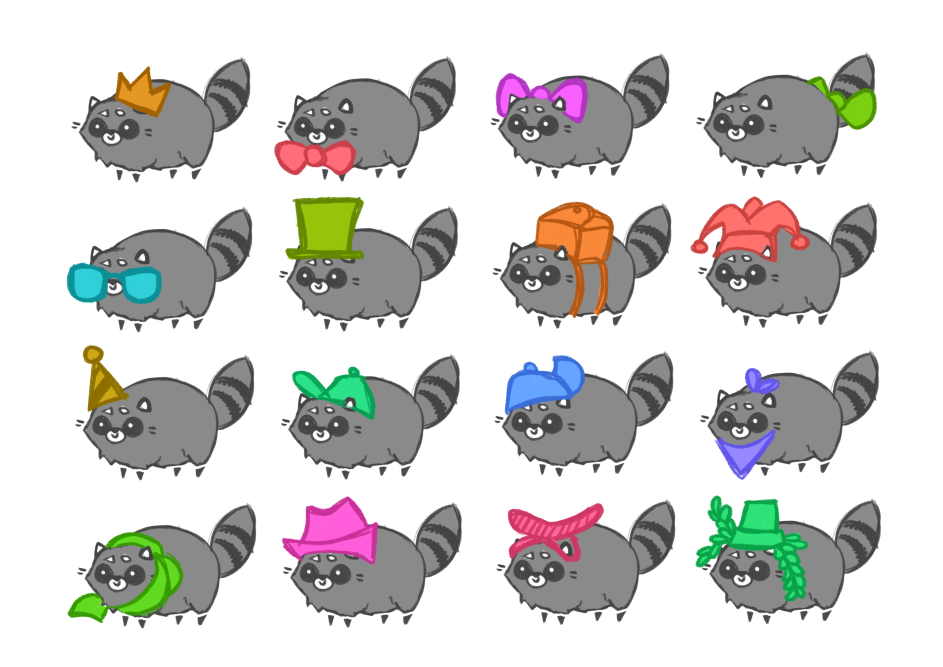 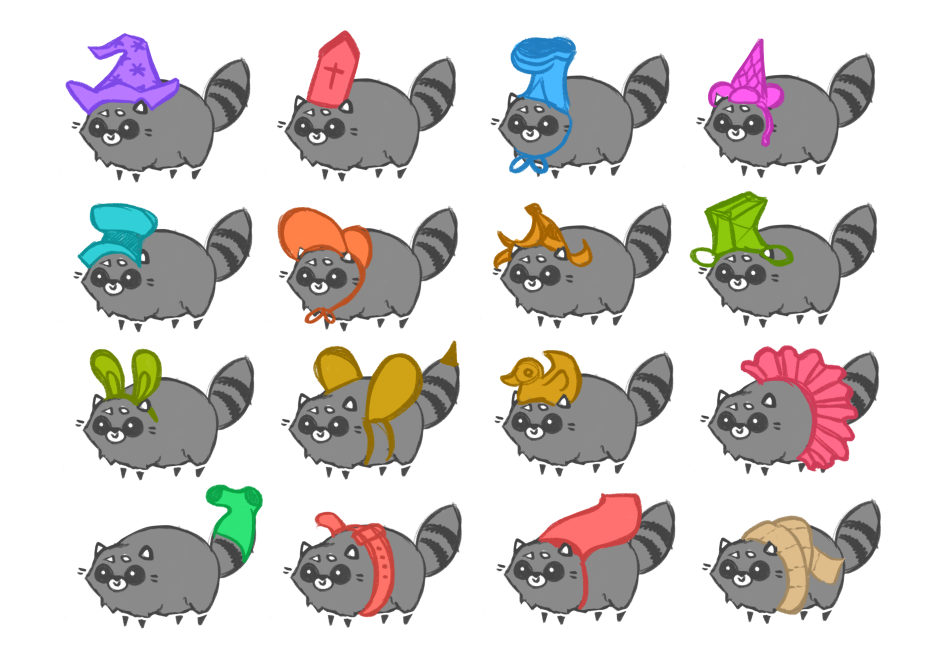 I had many more hat ideas for our raccoons, I wish we could’ve put them all into our game… 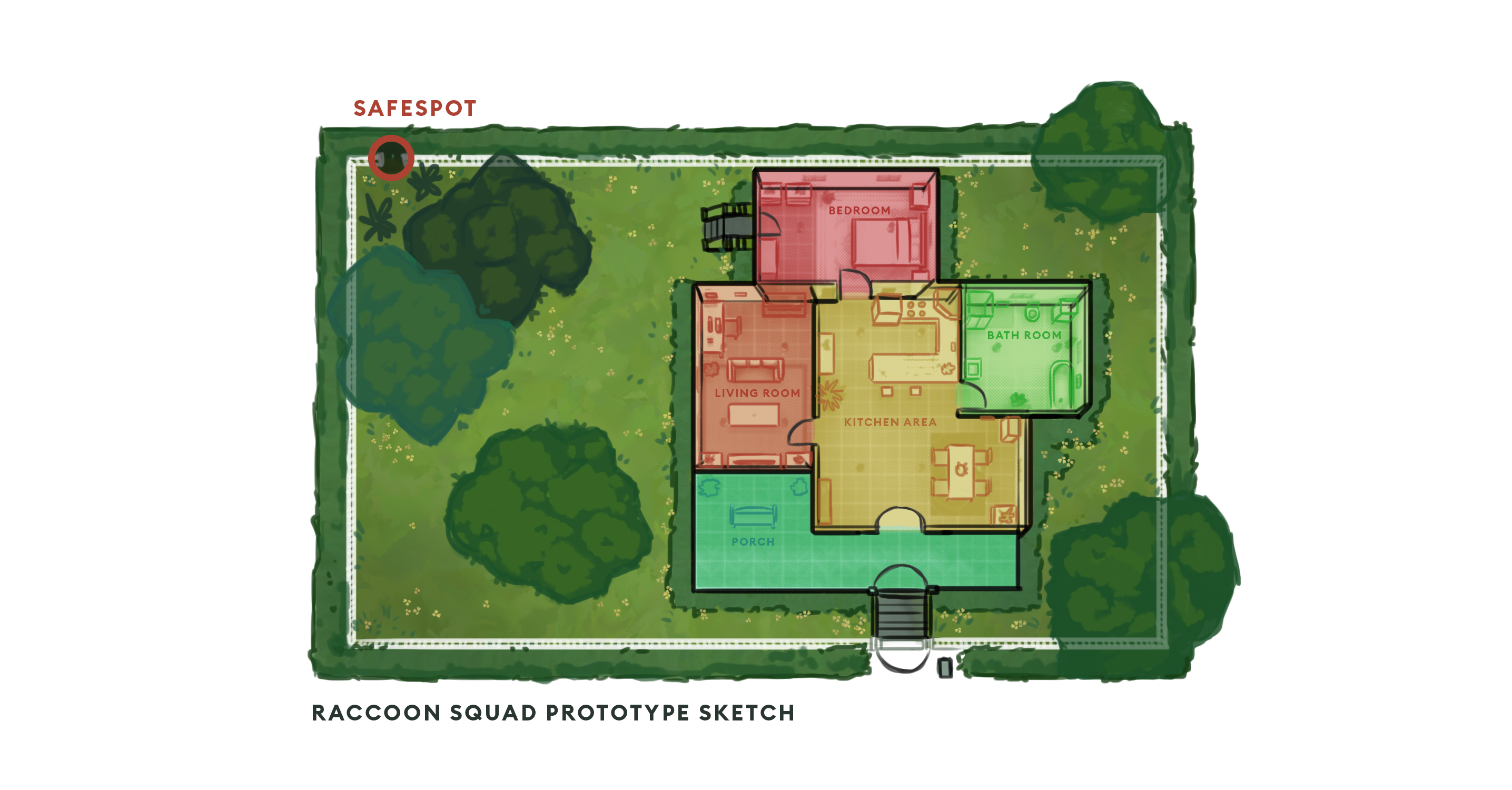 In this drawing you can see the first sketch of how I imagined one of our levels to be. Since I never wanted to focus on game design or level design, we decided to give that task to Nessi. Every level after that was designed by her.

Before we had the galaxy-trashcan idea, we wanted our “savespot” to be a stationed location in the garden of our levels. We later decided against that, because it limited our gameplay and made our gameloops somewhat boring.

As soon as we had our general plan for the game, I got to work on the icons - I had so much fun creating these, and I love seeing them in our game. So I had to create an icon for each collectable item in our game, as well as some icons for the human and miscellaneous things. 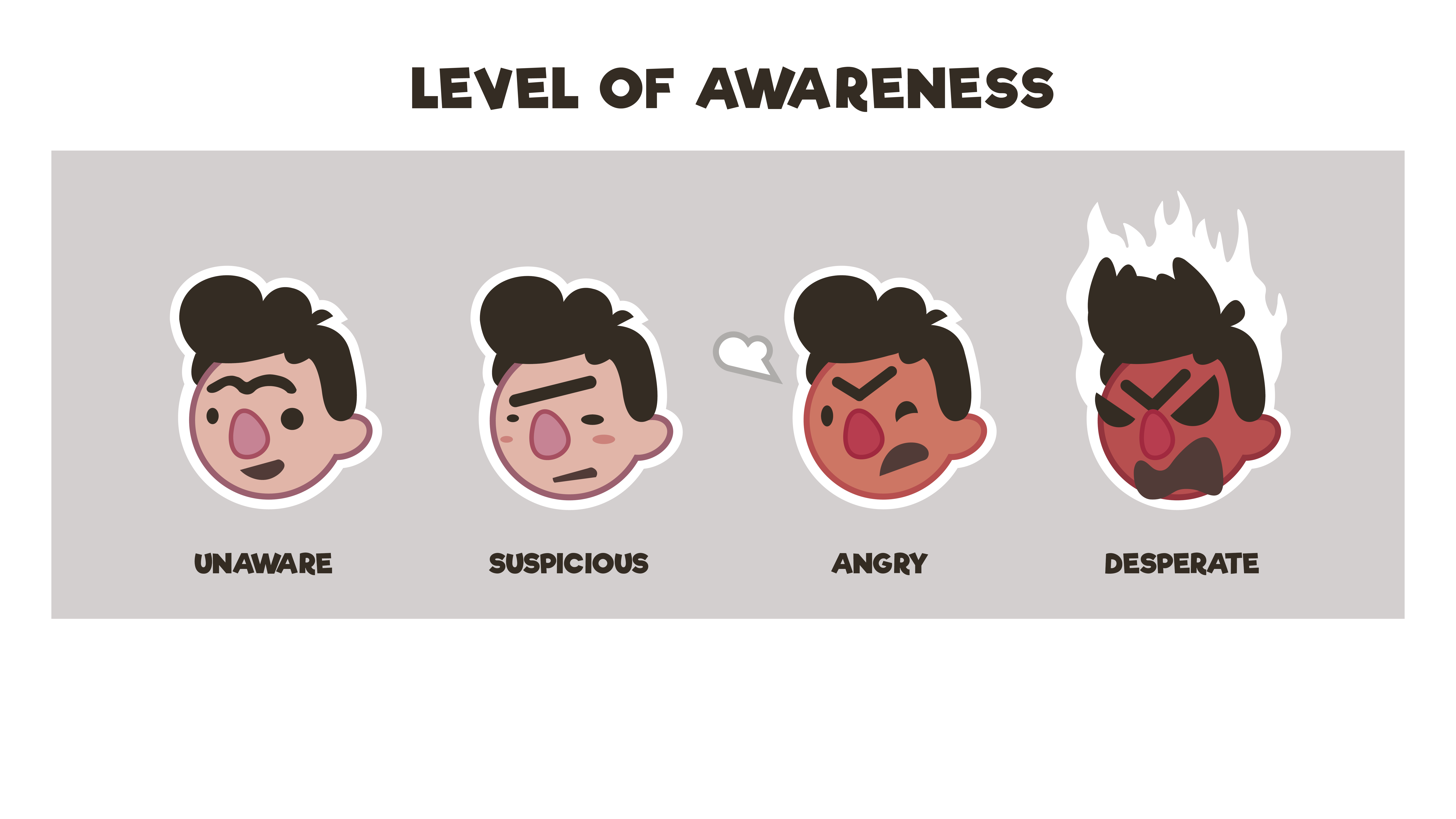 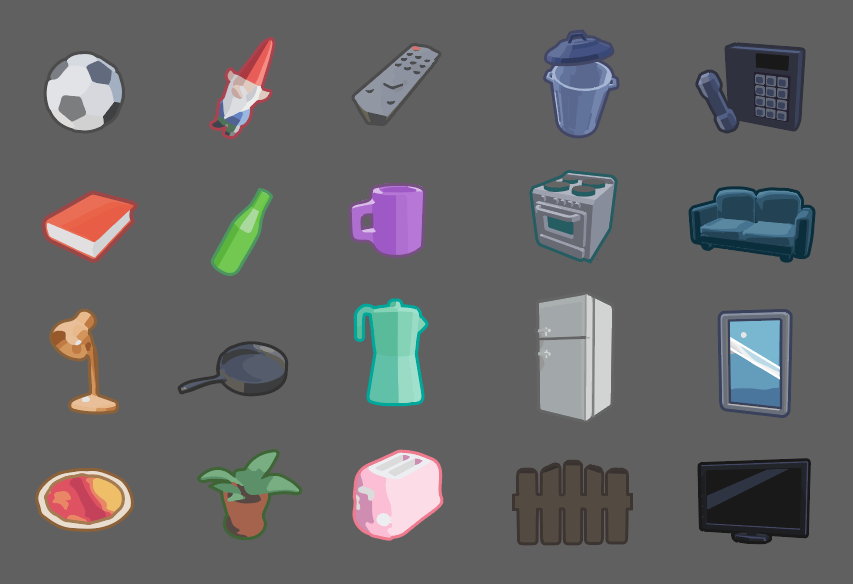 After I’ve created most of the icons, I had to design & work on the User Interface. Since there weren’t enough 2d-art related tasks for our 3d game, I had to take over that part. It also makes sense since I’m also a graphic designer (- I’m mediocre if I’m honest, but I did my best!). I did tons of research about user interface (UI) in indie games & cartoony multiplayer games, and i came to the conclusion to keep the design simple & round. The interface shouldn’t completely distract from the game, but it’s also important to make it easily readable so it’s not completely invisible either. 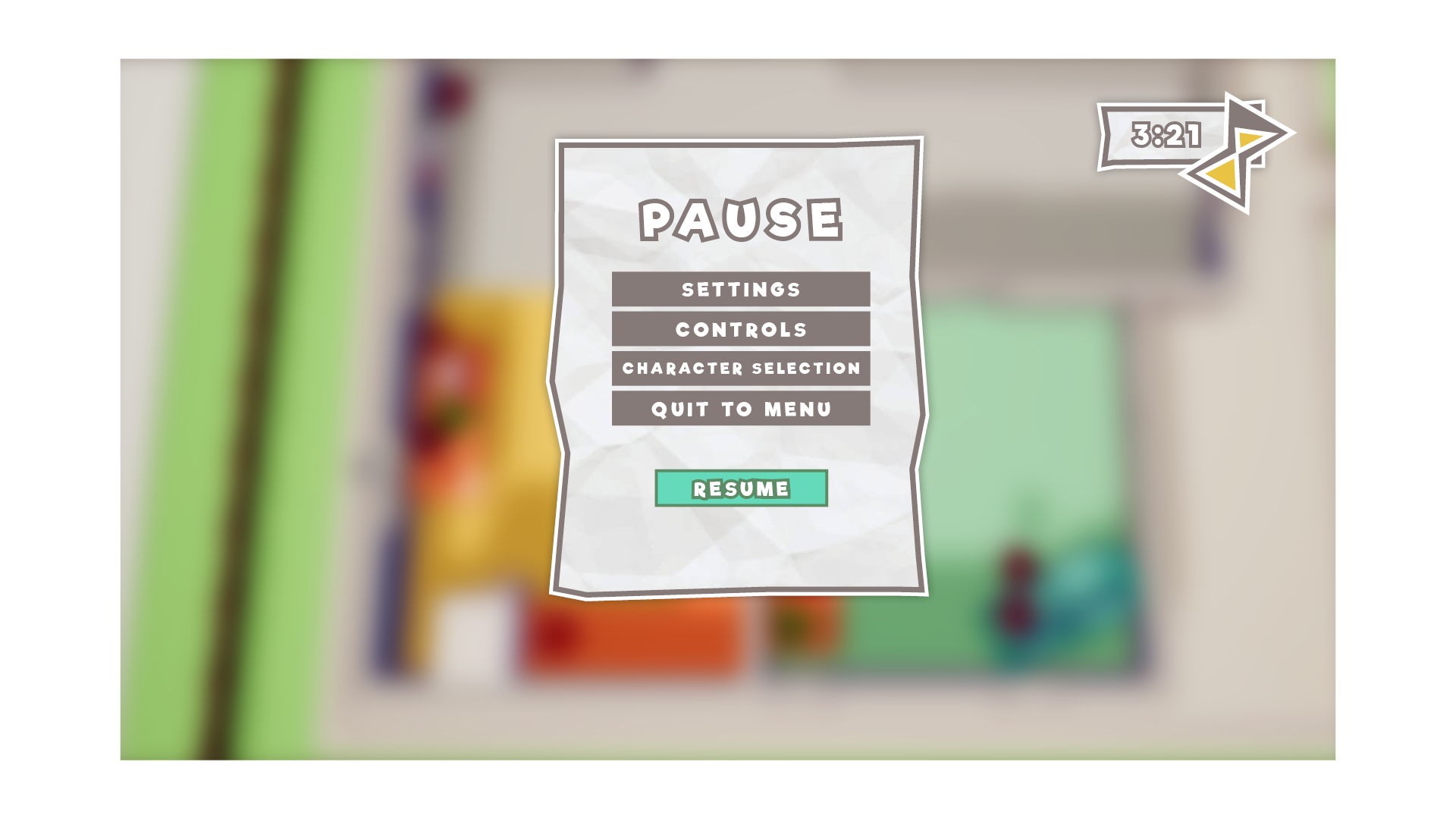 At first I tried to make the UI look like crumbled paper, but it didn’t fit the style I envisioned the game to be. 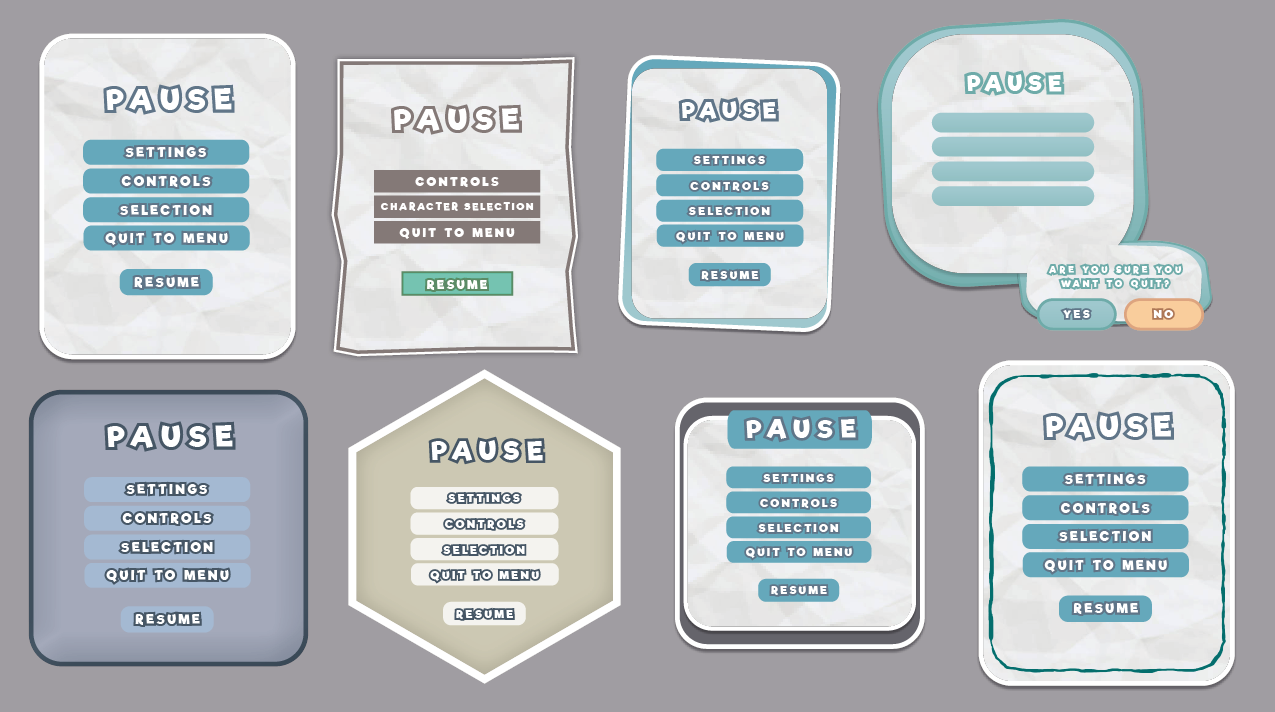 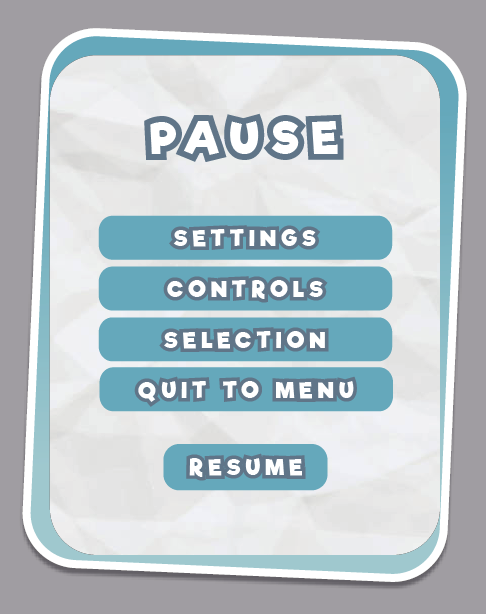 So this round, blue-white design is what the UI ended up looking like 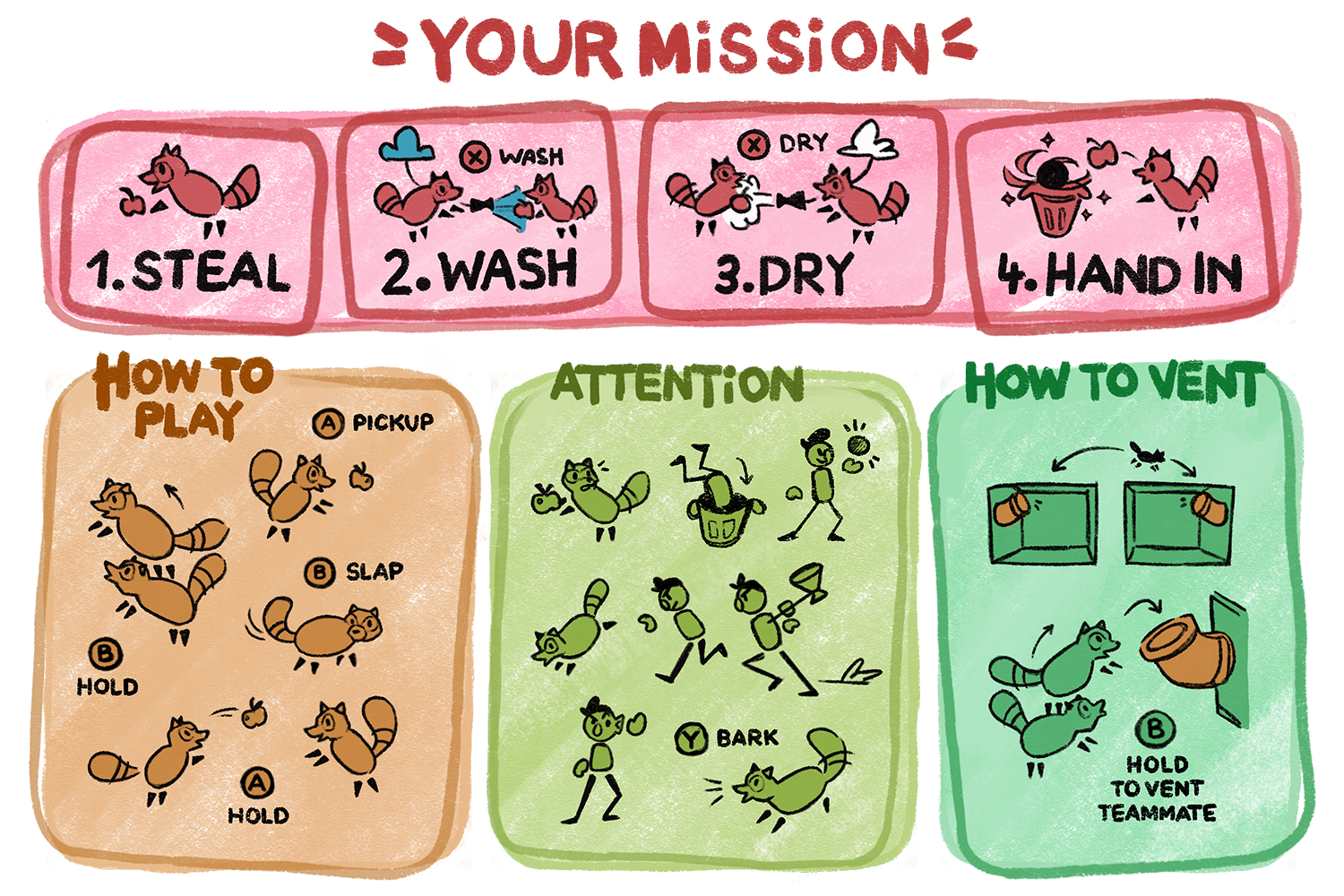 Once we realized we couldn’t make a proper tutorial for our game, I created this small comic-ish description screen of how to play it. Since we got great feedback, we decided to keep it like this.

In the last few weeks it was time for me to design our logo. Until the very last days, our game was supposed to be called “Raccoon Squad”. But after finding a extremely similar game to ours with the same title, we had to have an emergency meeting to find a new name for our game. Here are a few of the old logo sketches, rest in peace. 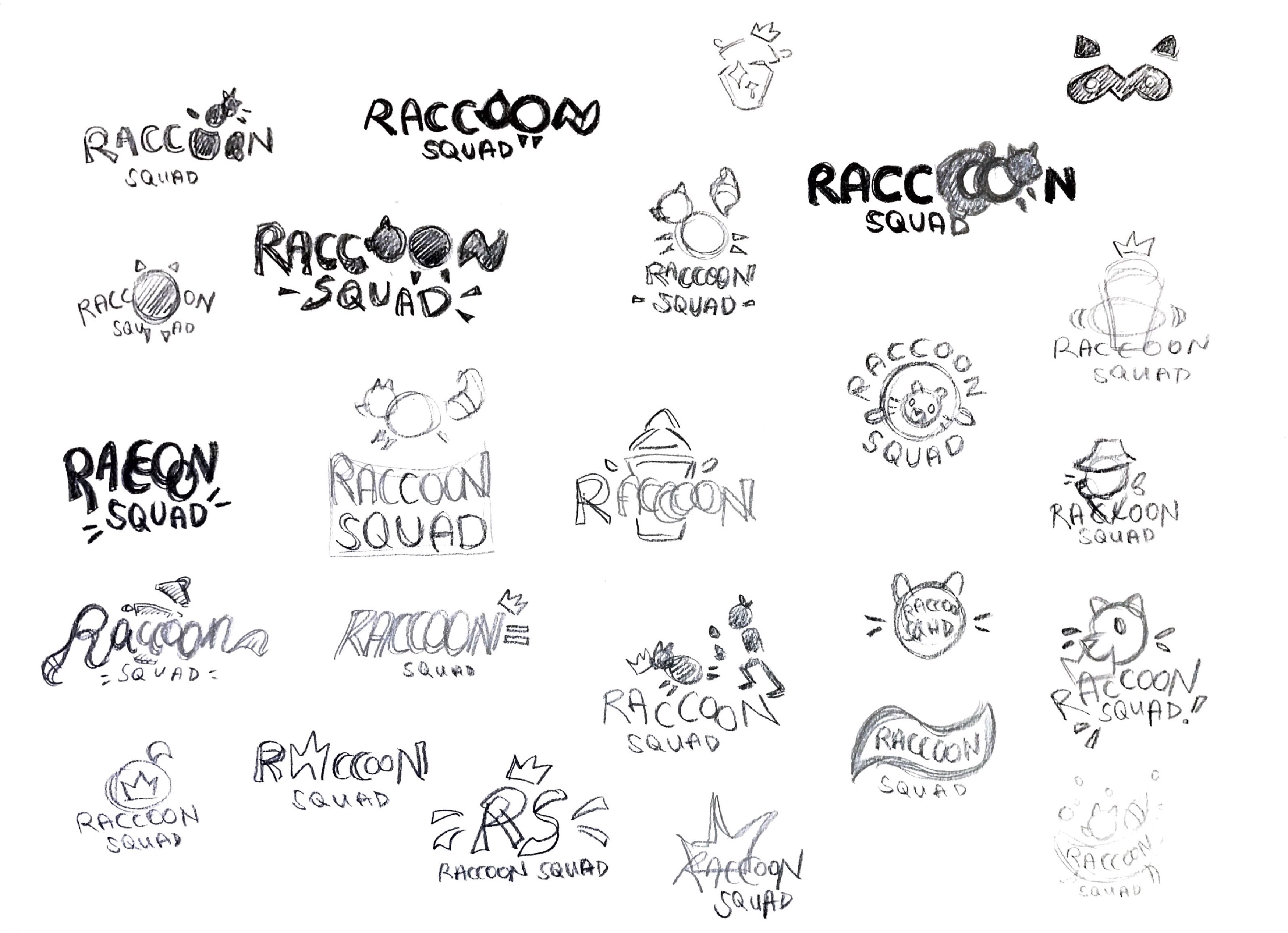 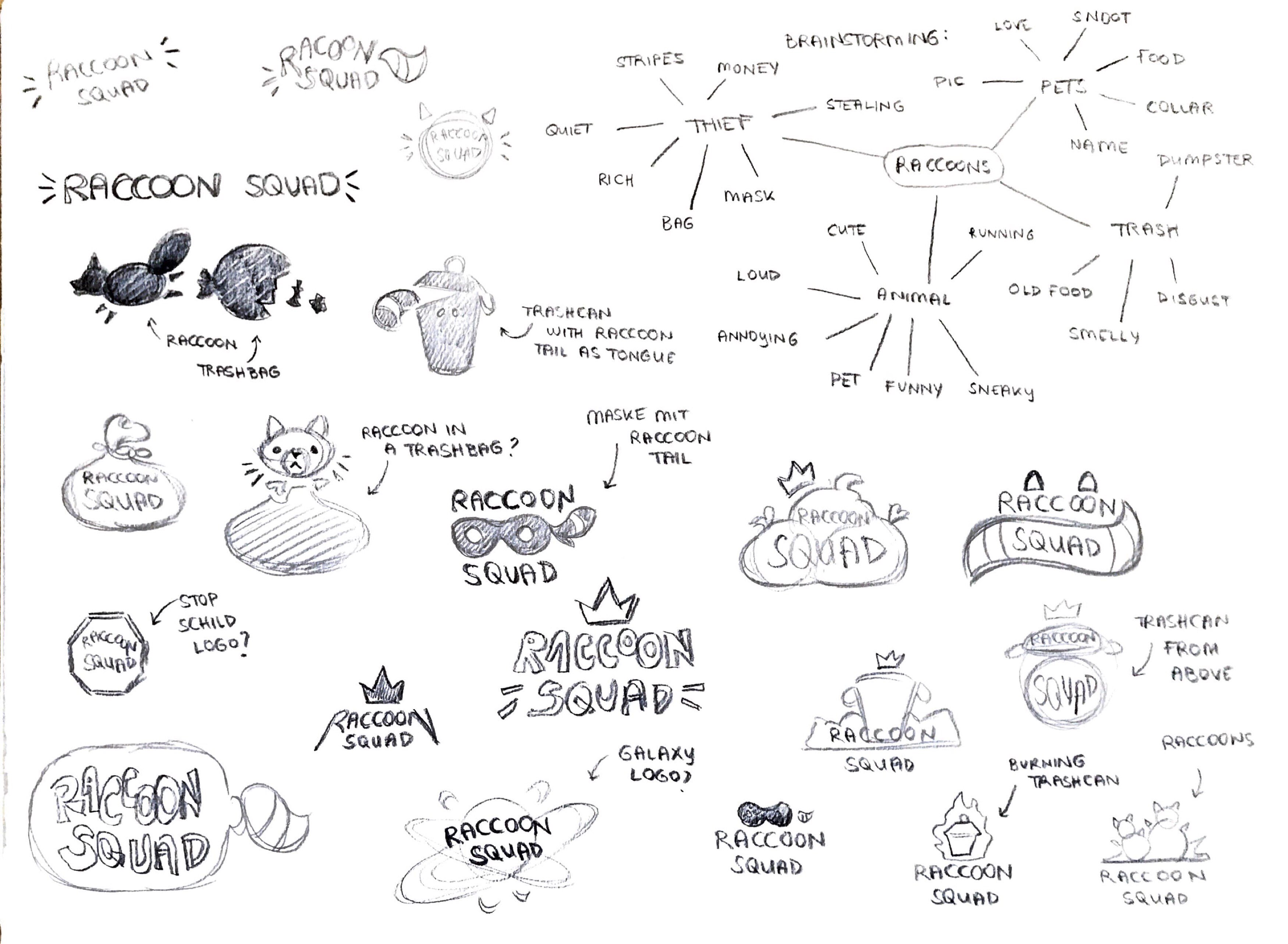 After we changed the name, I only had a few days left to create the logo. I’m happy about the end result, though I wish I could’ve had more time. 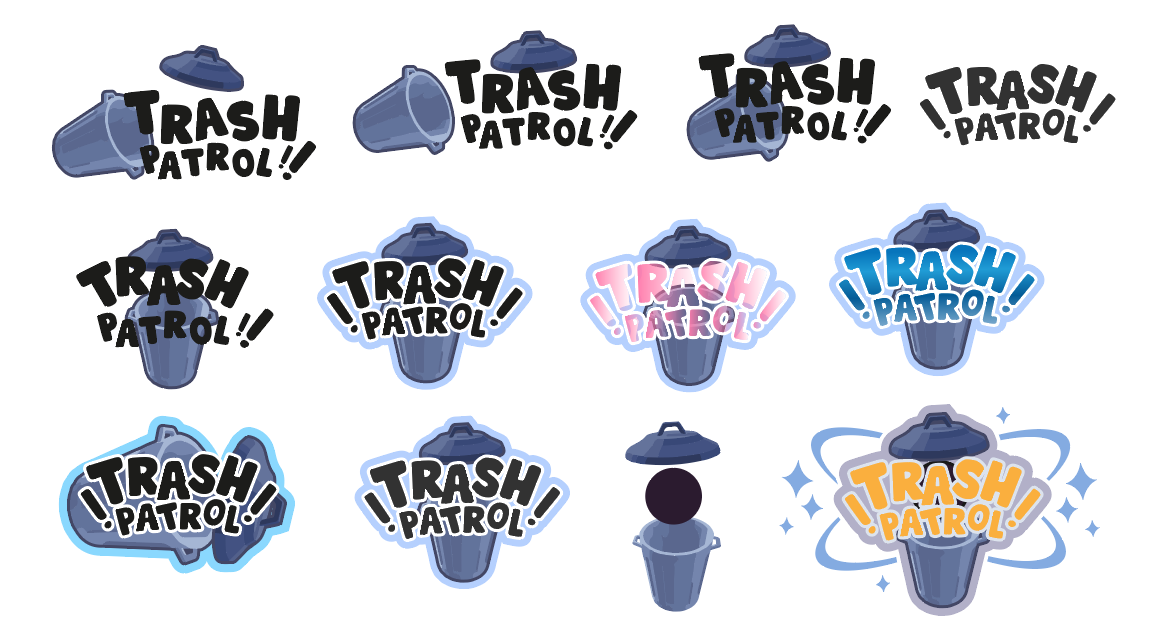 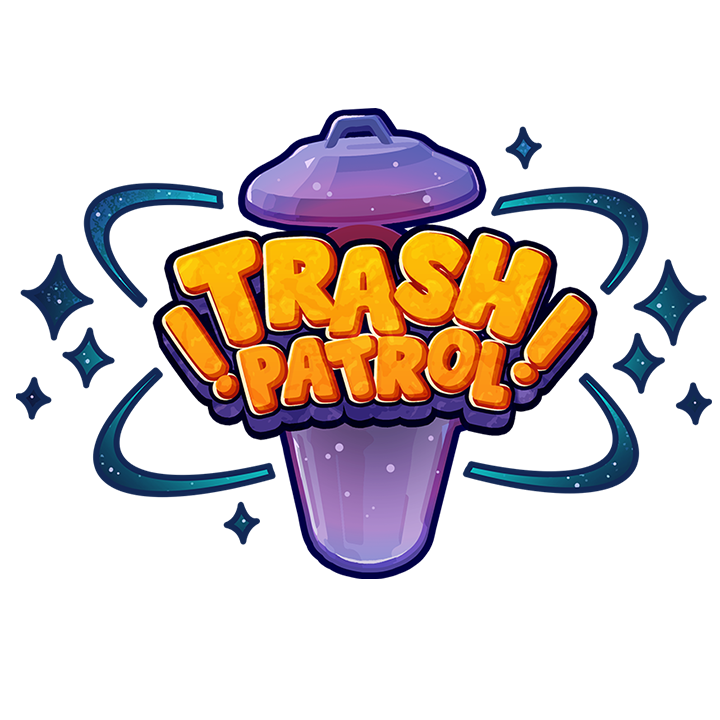 And last but not least, it was time for me to create at least one poster & some marketing material / print media for our game. I sketched many ideas, but in the end I was only able to draw one artwork. I knew it had to capture our general game-feel, as well as the colorful-quirkiness our game provides. It has to convey some action & teamplay, and I hope I was able to do just that. 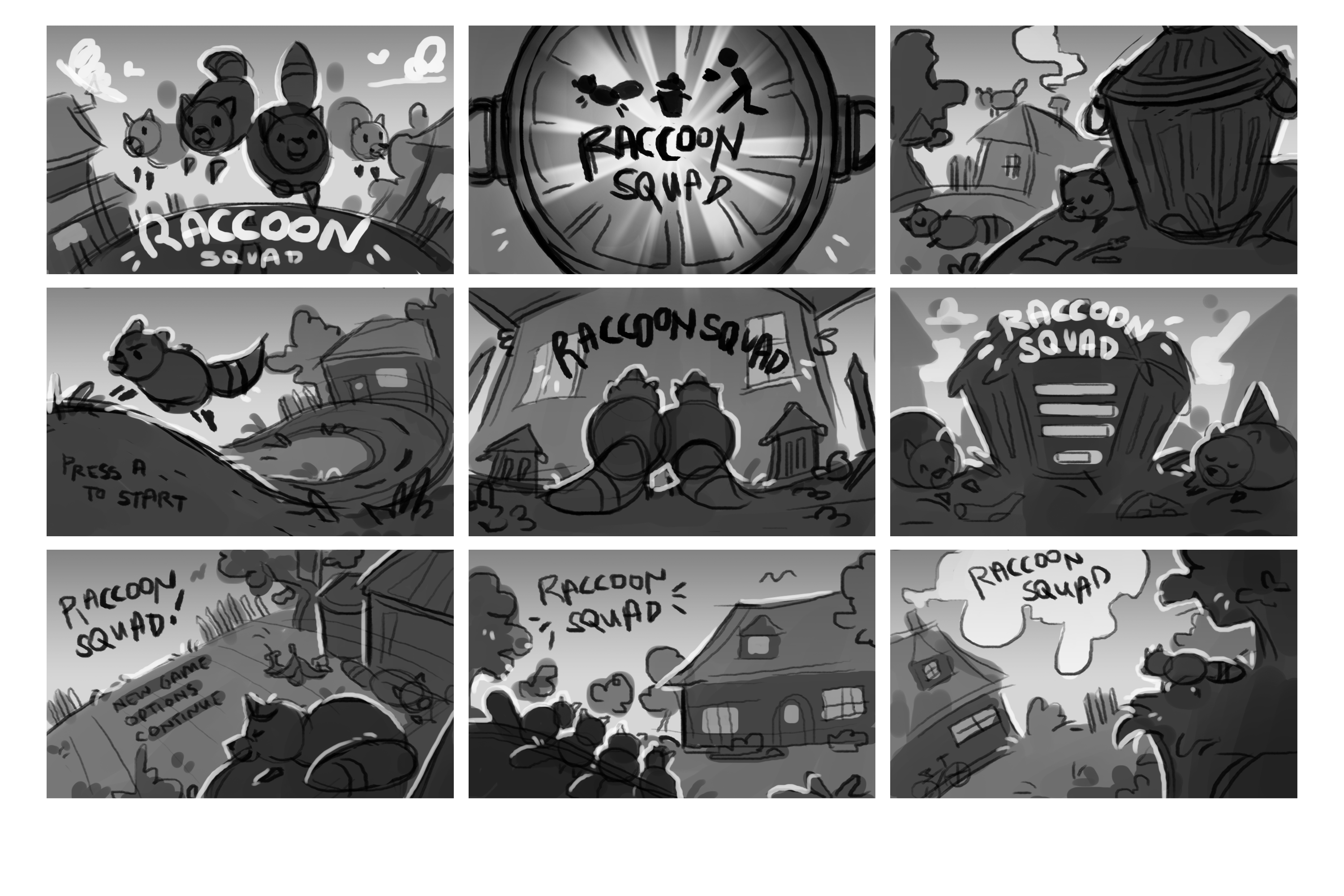 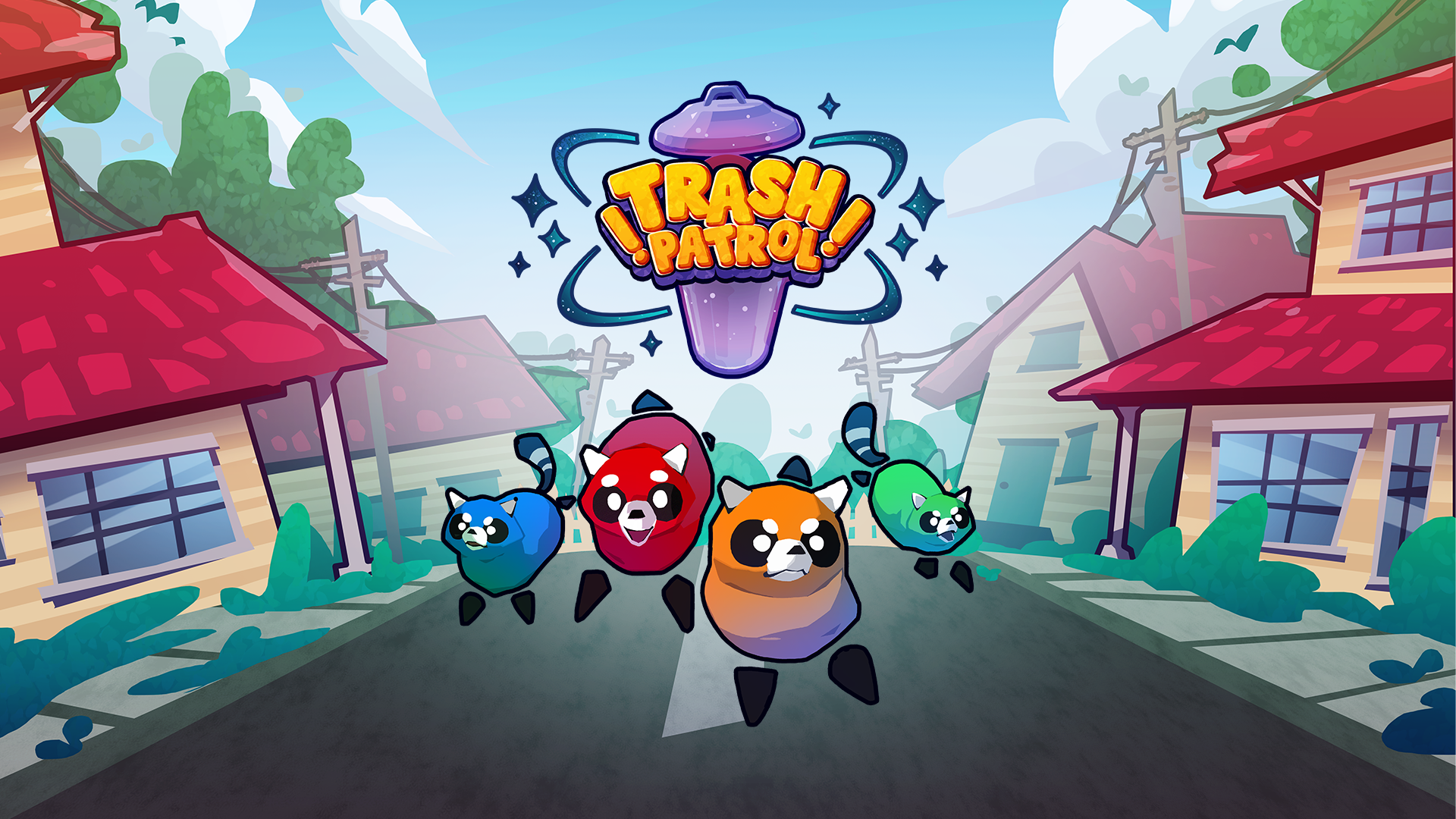 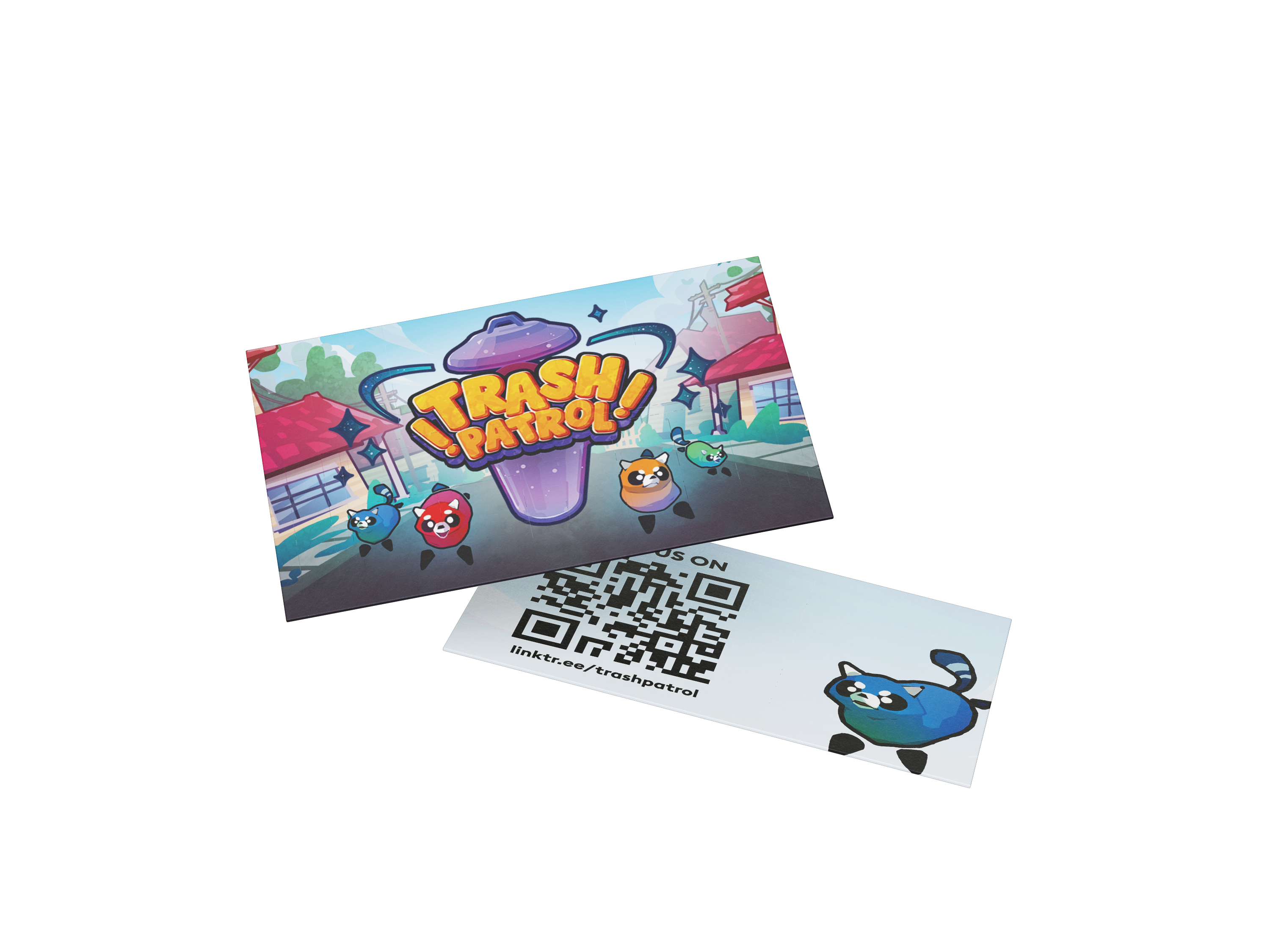 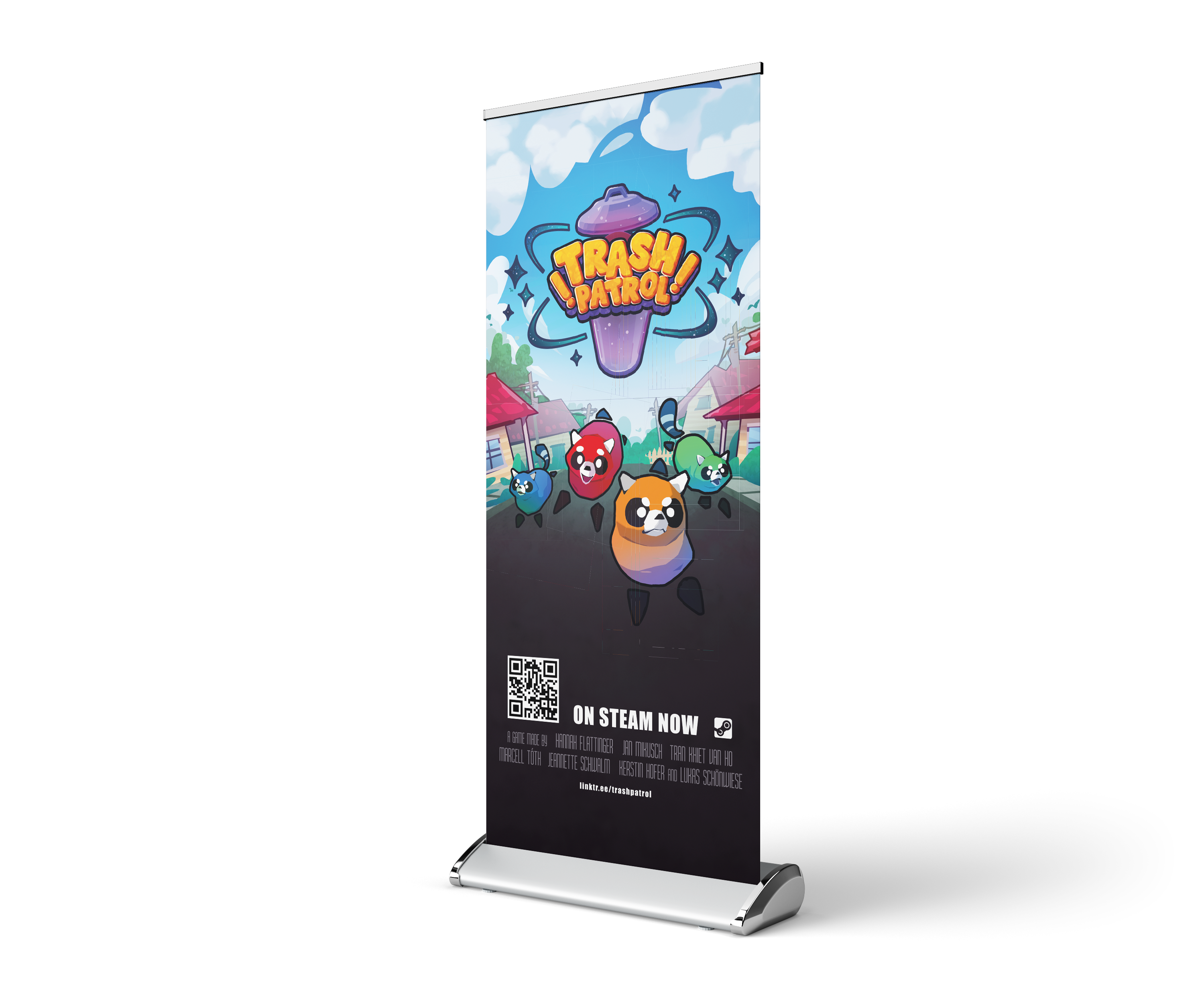 The last bit of graphic design (the rollups, stickers & business cards) was so much fun for me and in my opinion, it ties it all together. One of the most important things that I’ve learned: People love stickers. All in all, I had so much fun working on this game and if I could, I would do it all over again.

I hope I was able to give a small insight on what I’ve worked on & thanks for reading my entry & playing our game! Make sure to check out our social media to see more :)